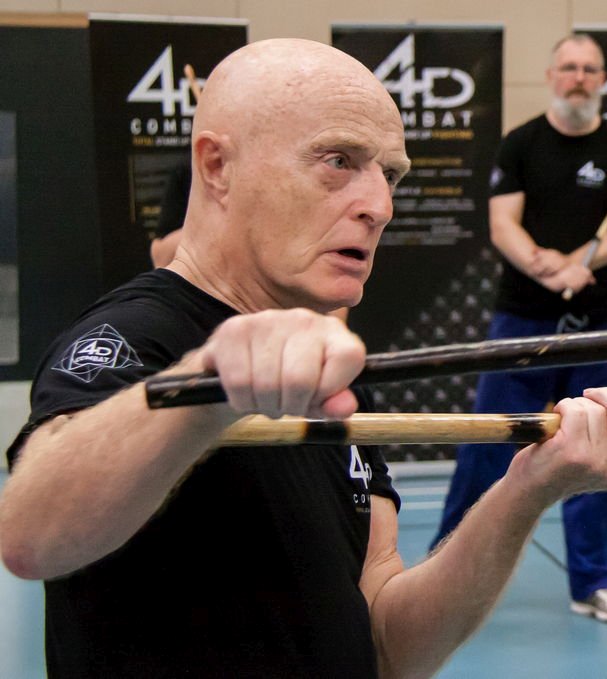 It is unlikely that any serious martial art instructor would not have heard of Guro Bob Breen. Indeed he has often been considered the godfather of Jeet Kune Do and the Filipino arts in Europe. He pioneered the JKD/FMA movement in the UK and across Europe throughout the eighties and continues to do so today. Therefore unsurprisingly becoming a full instructor under the legend Dan Inosanto.

Further to this Guro Bob had captained the English karate team, captained and coached the World championship British Escrima Team before going on to help found WEKAF (World Escrima Kali Arnis Foundation). Guro Bob is the author of must read books such as ‘Sparring’ and ‘Fighting’ (links) as well as numerous training dvds. Recently this has culminated in Guro Bobs evolutionary approach to his some 50 years of training, 4D Combat. With his material being now available through an online portal (Link).
I met Guro Bob in early 2002 at one of his famous London Academy seminars. On arrival I already had some nigh on ten years in JKD/FMA and a further six years in a hybrid system comprising Ju Jitsu and Judo in which I was a 1st Dan. Yet what I saw at this first seminar literally shocked me. Both Guro Bob and his top students, notably Guro Dave Onuma, where simply first class. The skill and knowledge as well as the simplistic functionality of their approach was a real eye opener. From then on I trained with  Guro Bob every chance I could get and can say that he took what foundations I had and made me a far more effective and functional martial artist.

Guro Bob is incredibly passionate about the martial arts and that comes across when you train with him. He is constantly researching and analysing what works and what does not. This has of course led to his dynamic new approach to fighting, 4D Combat. You can learn more about Guro Bob at the link below;

For us here at the Forge Guro Bob is a pioneer and innovator in the Martial Arts and we are incredibly lucky to have a direct lineage with Guro Bob. Please visit here to read more about Guro Bob’s evolutionary system, 4D.